- February 24, 2019
The subject for week 8 of the 2019 #52Ancestors in 52 Weeks Challenge, organised by genealogist Amy Johnson Crow, is 'Family Photo.' Of all of the family photos in my possession, the one I am about to share means the most to me - not only in terms of sentimentality, but in terms of historical significance. It is the oldest family heirloom in my possession, and the only image that I have of my great-great grandmother, and her children.

This photo was originally in my Nan's possession, but since I am the (self-appointed) Family Historian, she passed it on to me for safe keeping. This photo was taken in mid to late 1906 which was a period of great hardship for this little family but, before we continue I strongly suggest reading my previous post 'Invite to Dinner' to give you some important contextual information. You can find the post here.

Starting from the left is Michael Patrick Maguire (my great grand-uncle) born 14 May 1901 in Buninyong. He married Eleanor May Dixon in 1940. Michael served in the Royal Australian Air Force, enlisting during World War Two on 20 October 1943 in Melbourne. At the time of his enlistment he was employed as a storeman and was living at 421 Windermire Street, Ballarat with his wife.  Michael was discharged with the rank of Leading Airforceman being posted at 1 Central Recovery Depot and was discharged due to being medically unfit. Michael died on 31 August 1970 in Ballarat and was buried the next day at Ballarat General Cemetery.

Next to Michael is my great-grandmother, Lizzie. Born Elizabeth Mary Maguire on 21 March 1895 in Yendon to Patrick Michael and Mary Margaret Maguire (nee Quigley), Lizzie had a difficult upbringing. She was raised by a single mother after her father abandoned his family. Her mother supported her four children and her almost blind father on his disability pension on 6/6 a week. Lizzie was just 12 years old when she and her two younger brothers were removed from the family farm in Buninyong and charged as being Neglected Children. They were committed to the care of the State with a recommendation that they were boarded out to their mother, allowing her to receive a small stipend for their care.

Lizzie was in her early 20s when a young girl by the name of Kathleen Butterfield somehow came into her care. We have never been able to ascertain her connection to the Maguire family and perhaps never will however, she became known as Kathleen Mary Maguire, or 'Aunty Kath' and was raised by Lizzie as her younger sister. Much of Lizzie's early life is unknown to me. I haven't been able to ascertain when she left her home in Buninyong though I'm lead to believe by Maggie's only surviving child (at 99 years old!) that it was under less than amicable circumstances. Regardless it couldn't have been easy raising a child alone in the 1920s and 30s, and it's more than likely that Lizzie would have been subject to idle gossip and speculation.

Despite the hardship of her youth, Lizzie found love in the form of James Goymer Shorten and the two were married on 4 June 1932. Lizzie was heavily pregnant at the time. While seemingly scandalous to be pregnant and 'living in sin' in the 1930s, Nanny tells me that it was the midst of The Great Depression and they couldn't afford to get married prior to that. Lizzie and James only managed to scrape together enough money to wed a mere three weeks before their first child, James Thomas Shorten, arrived on the 25 June 1932. Little James or Jimmy as he was known, was soon followed by Patricia (my paternal grandmother). Lizzie lived most of her adult life in the Newmarket/Kensington area and passed away on 17 April 1976 in Parkville, Victoria. She and her husband James, who passed away three years prior, were interred in an unmarked grave in Footscray Cemetery. My Pop did make a wooden cross to mark their grave when they were buried, but it has since been removed.

Next to Elizabeth is the eldest of the Maguire children, Margaret Mary or 'Maggie' as she was known to some. Maggie was born on 8 January 1894 at Weller Street in Geelong, Victoria. As some of you may remember, Maggie was embroiled in a forgery case in 1907 when she was just thirteen years old. I will be further exploring this in next week's blog post.

Unfortunately Nanny's mother Elizabeth lost touch with her sister but from my understanding, Maggie had a very difficult personality and had little to no contact with her family.  To her grandchildren however, she was remembered as being very warm and loving. Maggie passed away in August 1980 at Williamstown Hospital and was buried on 6 August 1980 at Altona Memorial Park. Through Ancestry DNA testing I have had the good fortune of connecting with one of Maggie's grandchildren, and despite the separation of generations removed (2nd cousin once removed in fact), it is amazing the different things that we have in common, including being raised in neighbouring suburbs and attending the same high-school (during different years). Through that connection, I've also been put in touch with her cousin and her aunt who is one of Maggie's surviving children.

Next to Maggie is my great-great grandmother, Mary Margaret Quigley. Mary was born in Buninyong in 1871 to Michael Quigley and Margaret Kiely, both of whom immigrated to Australia from Tipperary, Ireland in the mid-nineteenth century. Mary was one of seven children born to Michael and Margaret Quigley, only four of which survived infancy. Margaret Quigley (nee Kiely) passed away in 1886  when Mary was only 15 years old, and I imagine she would have been responsible for running the household from that point onwards.

Mary married Patrick Michael Maguire at her father's house in Yendon, Victoria on 21 November 1893. Given that their first child Margaret was born a mere two months later, it's likely her father was standing nearby with a shotgun! Patrick and Mary had four children; Margaret Mary (1894), Elizabeth Mary, though she went by Elizabeth Ellen on her marriage certificate (1895), Michael Patrick (1901) and Thomas John Maguire (1906). In 1902, Mary's younger brother Michael Quigley Junior became embroiled in a scandal which had wide-reaching ramifications for the whole family. More details will be available next week in my post entitled "Courthouse."

Whether it was the result of her brother's conviction or earlier troubles within the marriage, Mary's husband Patrick abandoned his family sometime before or slightly after Thomas' birth in 1905-1906 - around the same time this photo was taken. Perhaps it was taken as a momento, to remind him of what he was leaving behind but I've always thought Mary's eyes held a depth of sadness, beyond the norm of photographs from the early 20th century. Mary remained in the Yendon/Buninyong/Ballarat area for the majority of her life, passing away from pneumonia and buried on 15 November 1920 at the Buninyong Cemetery.

Mary is holding her youngest son in this photo, Thomas John Maguire born on the 12 January 1906 in Buninyong. He was probably six months old in this photo.


Thomas enlisted in the Royal Australian Army in January 1942 in Tocumwal, New South Wales where he was working as a Defence Worker in the Shell Depot. He was single at the time and listed his sister Margaret as his next of kin. He transferred to the 15 Works Company where he was discharged on 12 March 1946 with the rank of Private. Thomas died in Parkville in 1957.

This little family certainly endured some difficult times, especially in the years directly before and after this picture was taken. I'm sure I can't imagine the reason why this image was taken, but I like to think that maybe they enjoyed getting dressed up in their finest Sunday clothes and heading out to the photography studio to sit for their one and only family photo.

Join me next week for Week 9 of 52 Ancestors in 52 Weeks looking at the arrest and trial of Michael Quigley Junior. 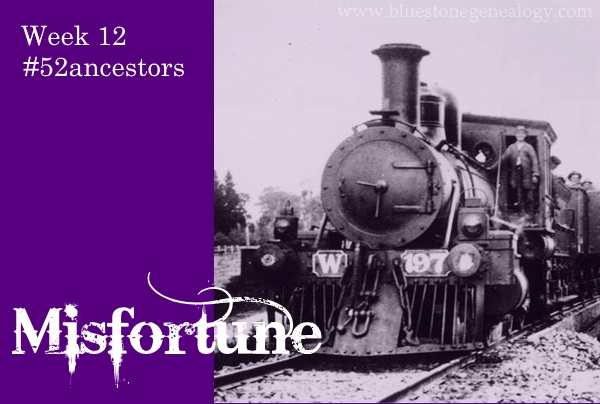